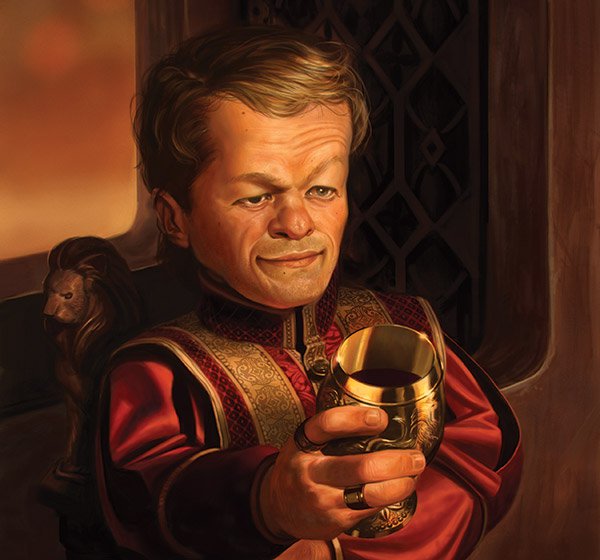 In part three of our eight-author series speculating on and examining our hopes for each faction in Game of Thrones 2.0, scantrell24 offers his opinions on House Lannister. Previous articles covered House Tyrell and House Greyjoy.

Note that the content of these articles are entirely speculation and wishes from players who consider themselves fans of each faction in question. Please do not take any predictions as fact. At the same time, if any of these guesses are correct, we demand all the credit.

[Spoilers through A Storm of Swords]

“My brother is undoubtedly arrogant. My father is the soul of avarice, and my sweet sister Cersei lusts for power with every waking breath. I, however, am innocent as a little lamb. Shall I bleat for you?” – Tyrion Lannister, A Game of Thrones

What We Know So Far

Three fully spoiled characters from an FFG preview article -- Cersei, Tywin, and the Tickler -- with red/crimson sidebars and yellow/gold textbox backgrounds. Also artwork for three cards -- Cersei (on a plot or event?), Tyrion and Lannisport -- from the original reboot announcement. And finally the name of an event, Treachery, which we glimpsed in the short preview video. 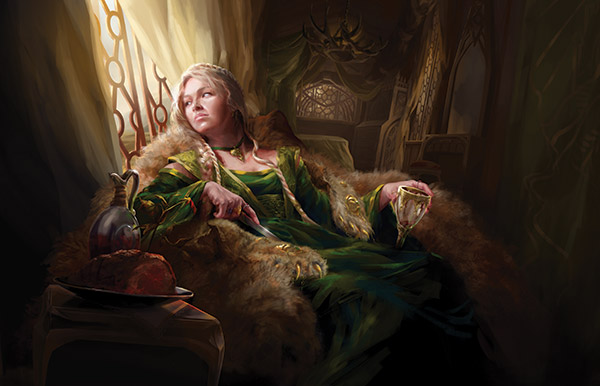 As the novels begin, the major players of House Lannister are Tywin Lannister (Lord of Casterly Rock, Warden of the West, and Ex-Hand of the King) and his three children; Cersei Lannister, the Queen; Jaime Lannister, a Knight of the Kingsguard; and Tyrion Lannister, a drunken and disfigured dwarf. Thirty years previously the Lannisters held far less power under the guidance of Tywin’s father, but their house is now in order (relatively) and King Robert is indebted to them, both literally as figuratively.

The Lannisters are rich, with most of their wealth derived from the mines beneath Casterly Rock. In the CCG era and 1st edition of the LCG, a many Lannister cards increased income, such as Lannisport and The Wealth of the Rock. Meanwhile other cards turned a large gold pool into a tangible advantage. For examples see Ser Addam Marbrand, Arbor Queen, and Sitting the Iron Throne. The +2 gold modifier on new Tywin suggests that Lannister wealth remains a defining theme in 2nd edition Thrones. However, the expanded cost curve means a gold dragon holds less purchasing power now. Hopefully the designers took that fact into account.

Card draw was another aspect of Lannister wealth. After all, heaps of gold are useless without cards on which to spend them! Golden Tooth Mines, Doubting Septa, Pyromancer’s Cache and many others provided the Lannisters with a constant stream of cards that they could eventually use to overwhelm opponents. This style of play, which requires time to setup before it dominates in the late game, could be better suited to the ever-patient Martells. Instead I’d like to see Lannisters have aggressive but conditional draw effects that require paying gold, winning intrigue challenges or taking advantage of other faction strengths (rather than a slow-but-efficient passive like GTM).

The Power Behind the Throne

“Some battles are won with swords and spears, others with quills and ravens.” ― Tywin Lannister, A Storm of Swords

The Lannisters play “the game” as well as anyone. Backroom bribes and manipulative lies are Lannister trademarks. We’ve seen these traits exemplified in two different ways before. First, there was an emphasis on intrigue challenge strength, as displayed by cards like Cersei Lannister and Misinformation. All three spoiled 2nd edition characters have an intrigue icon, and new Cersei raises claim during intrigue challenges, so this theme probably continues.

Secondly, the Lannisters featured potent challenge control cards like Yezzan’s Grotesquerie, Pentoshi Manor, Toll Gate, Double Bluff, and Walk of Shame that could pull the rug out from underneath an unsuspecting opponent or turn a perceived strength into a sudden weakness. We don't know if or how FFG might incorporate challenge control into the Lannister faction. Perhaps we see more cards like new Tickler with multiple uses (attack or kneel to trigger), granting Lannister's flexibility in executing their control effects.

Tywin Lannister, the family’s patriarch, is perhaps the most intimidating man in the realm. He never smiles, he’s an apt general, and he’s willing to achieve his desired ends by any means necessary (see: The Rains of Castamere and Red Wedding). These traits were exemplified previously by kneel cards such as Enemy Informer, Harry the Riverlands, Prisoner of War, The Westerlands, and Court Singer that exhausted opposing characters. Kneel has been a Lannister staple for so long that it’s hard to imagine them without it, but we've already seen stand effects on 2nd edition Stark cards. Clearly the addition of two extra factions necessitated some realignment, and Lannister shouldn't have too many strengths anyways.

The Lannister-specific keyword in 1st edition, Infamy, was fitting for a House with so many strong personalities, but it never received a proper fleshing out. Cards like Ser Gregor’s Band, Ser Jaime Lannister, Widow’s Wail,Qyburn, Red Cloaks, and Castamere teased us and displayed a glimpse of what might have been. I hope that Infamy makes a comeback in 2nd edition with abilities that change or grow stronger with each additional power invested on an Infamous card. That way the characters "evolve" over time in the same way that characters evolve in the source material.

Finally, thanks to Tyrion Lannister’s encounter with the Clansman tribes in the first book, House Lannister was home to a horde of Clansmen characters such as Shagga and Moon Brother Harriers. Clansmen ran counter to traditional Lannister playstyles. They were aggressive, weak at intrigue, and willing to sacrifice long-term card advantage for immediate bonuses. I’m guessing we won’t see any Clansmen cards for a year or two. Once the standard Lannister playstyle is firmly entrenched, they’ll be introduced to shake things up and let Tyrion have his time in the sun.

One challenge facing FFG is that Tywin’s children, especially Cersei and Tyrion, don’t get along and even undermine each other's plots at times. Furthermore, Cersei fails to control her own children, like when Ned is destined for the Wall until Joffrey takes his head instead. It will be interesting to see how the designers incorporate the Lannister family dysfunction. Maybe some versions of Cersei will be discarded or weakened if you control Tyrion and vice versa? I’m just spitballing here – let me know your own ideas in the comments!

scantrell24 learned to play A Game of Thrones in January 2012. The first deluxe expansion he purchased was Lions of the Rock, and the lions sunk their claws in deep.

Expect another author's take on another faction in the near future. When FFG™ officially releases more information about the House Lannister faction, we'll have another look.

One challenge facing FFG is that Tywin’s children, especially Cersei and Tyrion, don’t get along and even undermine each other's plots at times.

I really like this. I think in first edition this sort of infighting was somewhat represented by the reliance on the ally/mercenary trait, but I would love to see a more elegant way to capture this.

I admit I was surprised when the article announcing 2.0 showed us the Cersei image you had above, but the combat article showed us a new version with art I dislike, especially in comparison. I hope we'll see it on a Lannister card anyway!

May 28 2015 07:03 PM
I'm thinking mercenaries and efficient characters of dubious loyalty should be a Targ thing. Well, maybe Bolton too, but I see that as a later addition for Stark.

Have to generally agree with the article, Lanni aren't going to get loads of strengths like before but it should provide greater identity overall.

The composition by card count of the core is not something we know, but everything points to most cards being 1x. The "I'd rather just pay more" argument doesn't quite help, as they want to attract buyers at a 'reasonable' price point, and a full 3x core is likely to be an intimidating barrier of entry. Since one of the main reasons to reboot (and the one I'm most excited about) is to grow this game and make it more accessible, anything that makes it easier to get in to is a good idea!

the only point i would argue(just playing devil's advocate, your point is good) is the 1x cards is good. Everyone who plays competitive is going to need 3 of i would assume. but when i first got into it(very late) i was annoyed at having to buy 3 cores. i feel like your not getting the full game experience with it being competitive b/c most people will get 3 and you'll be out gunned, get pissed and not want to play.

too bad they couldn't make the 1x box and a 3x box, call it beginner and advanced or something, casual and competitive. i don't know, lol

the x1 makes way more sense it gets more people to try it and it lets competitive players have larger card pool right from the start.

Anyone else sorta wish the pictured artwork of Cersei appeared on her core set character card?

Anyone else sorta wish the pictured artwork of Cersei appeared on her core set character card?

Another Lanni comment - I never really thought of kneel as an embodiement of Tywin intimidating people, I thought it was more about catching your opponent off-guard (literally, when he/she wasnt ready(standing)) - a continuation of the pull-the-rug-out-from-under-them effects you describe.

I thought it was more of a Joffrey/Cersei thing: "You WILL bend the knee!"

Yeah I always thought of the "kneel" effect as more of a "distract" or "divert" effect. For example, Lannisport Brothel would quite easily be used to "distract" someone from current events, especially mercenaries or allies. And I can't see a brothel having much of an effect on Lady characters. Perhaps Lannisport Brothel for V2 could be:

Standing Action: Kneel Lannisport Brothel to kneel a non-Lady character, or up to two Mercenary or Ally characters.